Going Crazy In the Green Machine

A Sample Chapter from Going Crazy In the Green Machine 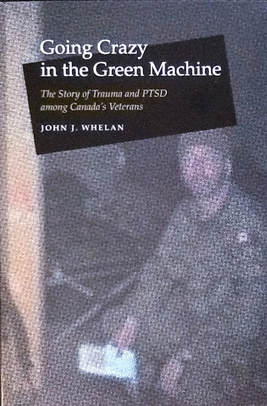 “I WAS A FUCKING MONSTER, no better than those other murdering bastards!”

Billy spat out these words through tear-filled eyes as he talked with other veterans about Bosnia—about the things that still haunted him over twenty years later. Head lowered, he continued telling the other guys and Dr. Neary about stuff that he had never told anybody.

Billy was in a group with other veterans who had also been released because of post-traumatic stress. They all understood what he was saying because they each had similar stories and similar struggles. Each of them had seen psychiatrists, psychologists, or therapists of various stripes, and each of them had been released from the military.

They were in this group because, despite all the therapists and medications, they were still haunted by memories from their past; they did not trust anybody and lived in a perpetual limbo, missing the life they had once lived in the military.

For each of them, being in a room with other military vets caused them a lot of anxiety because, despite the opinions of doctors and therapists, what these other guys thought of them mattered tremendously. These were the guys who had the power to accept them or to reject them, and there was a lot at stake if they risked being vulnerable; maybe these guys would also see them as weak, or maybe they would laugh or make a joke.

Billy did not know that everybody in the room had the same fear—of being misunderstood or judged. However, there was something safe and familiar about the easy banter with these guys, for it spoke of an understanding that they shared a common bond.

For Billy, this particular day in the group had been an eye-opener. It felt good to get some of this off his chest, even though he felt exhausted from the things he had said.

Dr. Neary gave him a heads up that he would be tired that night and that he would give Billy a phone call the next day to check in with him. In the meantime, it would be good for Billy to spend time with his wife, Michele, and the kids that evening before hitting the sack.

Billy had lots of energy when he got home, but sure enough, by nine o’clock he was lagged. He went off to bed and crashed.

He awoke the same time every night, no matter when he went to bed. His mind wouldn’t slow down for him to drift back to sleep, not that sleep was any better.  Billy never knew what would happen once he shut off. Sometimes he slept for two or three hours only to bolt up in sweat-soaked sheets sometimes yelling as he awoke. Other nights he would be out for most of the night and then would dream.

In many of these dreams—no, they were more like nightmares—he was engaging approaching enemies in gunfire, and he would run out of ammo, or he would be walking silently through the remains of burnt animals  looking for something, but he never could figure out what he was looking for.

One dream that always upset him was seeing himself reaching into a pool of water to rescue a drowning boy, but each time the boy would slip out of his grasp, no matter what he did. He would often awake from this dream panting for breath, his heart pounding, and his eyes watering, maybe tears, he couldn’t be sure, but this would bug him for the rest of the night.

It had gotten to the point where Michele didn’t sleep in the same bed anymore; too much thrashing about from Billy, and too many hands and feet flailing in the night.

Up to the bathroom for a leak, Billy caught his image in the mirror. Whose eyes were these staring back at him? He did not recognize that person anymore and hadn’t for a long time. Where were the old smile lines around his mouth? Where had the sparkle in his eyes gone—replaced by these black holes and hollowed sockets.

The days were no better. He had the feeling that a veil had been draped over his eyes, separating him from the world around him—everything seemed to be fuzzy, like walking in a dream. Billy could not seem to connect with anything around him. It was like part of him was tuned into a different channel. The constant gnawing, deep in his guts, that felt like something terrible was about to happen. Without warning, the quiver would start deep in his centre and radiate out causing his hands to tremble.

Then his legs would turn to rubber, and the muscles in his neck would tighten till they quivered. His jaws always seemed to be sore when he got up in the morning.

Constant thoughts of having to get away, but having nowhere to go. Nowhere to run. He would try to slow the thoughts down… focus, focus on anything else… the kids… Michele… slow his head down… focus… do something… focus on something.

Where was the kid that had proudly worn the uniform and had gone overseas? It was a lifetime ago, but it also felt like yesterday. Billy was lost somewhere between the muddy roads of Bosnia and now, here, in this place. He did not recognize himself in this place. A veteran? That word just meant that he had been thrown away and that he had no purpose that he could see. Pride replaced by this smothering nothingness.

How did it all end up here?

These thoughts pissed him off and so did almost everything for that matter.
Buy The Book